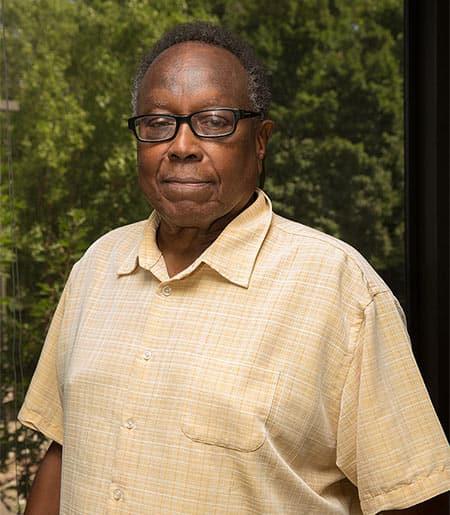 Born in Jamaica, West Indies, he completed his undergraduate studies in England at the University of Birmingham where he earned a Bachelor of Social Sciences Honors degree specializing in Economics, Political Science, and Sociology. He then earned Masters and Doctoral degrees in Political Science in Canada at Queen's University, at Kingston, Ontario. His extensive University teaching career includes four years at the University of Waterloo in Canada; three years at Makerere University in Uganda, East Africa; three years at Cornell (Department of Government) in the early 1970's; two semesters at the University of Denver (Graduate School of International Studies); seven years at the University of the West Indies, Mona campus, Jamaica, and occasionally at the Institute of International Relations on the St. Augustine (Trinidad & Tobago) campus; and two years at Southern Illinois University at Carbondale, prior to returning to Cornell (Africana Studies & Research Center) in 1983. He also has extensive experience in university administration. At Cornell he was Director of the Africana Studies and Research Center (1991-96) as well as Director of Cornell's National Resource Center in African Studies (1991-94) funded by the U.S. Department of Education.

Previous administrative experience includes his position as Director of General Development Studies, an experimental all-University course he founded at Makerere University (1969-70); Acting Director of the Center on International Race Relations at the University of Denver (1972-73); Campus Dean of the Faculty of Social Sciences at the Mona (Jamaica) campus of the University of the West Indies (1976-78); University Dean of Social Sciences at the UWI (1978-80) with responsibility for academic programs in Jamaica, Barbados, Trinidad & Tobago and the Bahamas; and Coordinator of the Black American Studies Program at Southern Illinois University (1981-83).

He has traveled, lectured and published widely in Africa, Asia, Europe, Latin America, North America and the Caribbean. He has attended numerous international professional conferences including participation by invitation in six UNESCO Experts' Meetings (two of which he chaired, being Vice-Chair, for a third) and involvement in other seminars convened or cosponsored by the United Nations University. In 1979, he delivered the keynote address at a symposium in Kingston, Jamaica on "Caribbean Supports for National African Liberation" cosponsored by the United Nations Special Committee Against Apartheid. More recently, at the invitation of the Ambassador of the Permanent Observer Mission of the African Union to the United Nations, he participated in the opening panel discussion on the theme of "The Year of Peace and Security in Africa" at the May 2010 Special Commemoration of Africa Day in New York City.

Other professional organizational activities include his service (early 1980's to 2000) on the Board of Directors of Trans-Africa Forum in Washington, D.C. and being a founding member in 1993 of the TransAfrica Forum Scholars Council. He chaired the Association of Caribbean Universities and Research Institutes (UNICA) Committee on Caribbean Resources, Interests and Needs in African Studies (1975-77); was a member of the Caribbean Conference of Churches Goodwill and Fact-Finding Mission to Haiti (August 1987); and has served on the Editorial Advisory Board of The CARICOM Bulletin (publication of the Caribbean Community Secretariat in Guyana). From 1986-1990 he was on the International Technical Committee charged with launching the Institute of the Black Peoples in Burkina Faso, culminating in his election to chair the IBP's Constituent Assembly's Commission set up to approve the Convention establishing the IBP in April 1990. He was a founding member and has served on the Board of Trustees and Overseers of ACDESS (African Centre for Development and Strategic Studies) established in Nigeria in 1991. He was a consultant for the launching and development of the Thabo Mbeki African Leadership Institute (TMALI) established at the University of South Africa in 2012 with the mission of "Investing in Thought Leaders for Africa's Renewal."

Dr. Edmondson is listed in the Dictionary of International Biography, Vol. XII, (1976-77), published in Cambridge, England; in Personalities Caribbean, (7th ed., 1982-83) published in Kingston, Jamaica; and in the first edition of Directory of Caribbean Personalities in Britain and North America (Kingston, Jamaica, 1985). He received the “Distinguished Africanist Award” from the New York African Studies Association in 2013.

This selective list of publications illustrates his range of research interests in Black World cum Third World affairs: “Intellectual and Cultural Creativity in the English-Speaking Caribbean” (Working Paper, United Nations University, Tokyo, 1981); "The Internationalization of Black Power," Mawazo (December 1968); "The Challenges of Race: From Entrenched White Power to Rising Black Power," International Journal (1969); "Africa and the African Diaspora: Interactions, Linkages, Racial Challenges in the Future World Order," in Africa in World Affairs: The Next 30 Years ed. by A. Mazrui and H. Patel (1973); "Caribbean Nation Building and the Internationalization of Race," in Ethnicity and Nation Building ed. by W. Bell and W. Freeman (Beverley Hills/London, 1974); "Trans-Atlantic Slavery and the Internationalization of Race," Caribbean Quarterly (June-September 1976); "Educational Challenges of the Caribbean Connection with Africa," Journal of African Studies (Summer 1977); "The Caribbean Within the Third World and the Non-Aligned Movement," Korean Journal of International Relations, No. 19 (1979); co-author, "The Commonwealth Caribbean and Africa: Aspects of Third World Racial Interactions, Linkages, and Challenges," in Contemporary International Relations of the Caribbean ed. By B. Ince (St. Augustine, Trinidad, 1979); "Black Roots and Identity: Comparative and International Perspectives," International Journal (Summer 1979); "Black American Educational Interests in the Era of Globalism," Journal of Negro Education (Summer 1984); "African History and African Studies in the Black Diaspora" in UNESCO Educational Process and Historiography in Africa (Paris, 1985); "Black America as a Mobilizing Diaspora," in Modern Diasporas in International Politics ed. by G. Sheffer (London, 1986); "Pan-Africanism and the International System Past and Present," in Pan-Africanism: New Directions in Strategy ed. by W. Ofuatey-Kodjoe (Washington, D.C., 1986); "Africa and the Developing Regions" in UNESCO General History of Africa, Vol. VIII, (Paris, 1993); "The Caribbean Diaspora/Caribbean Homeland Dialectic and the Global Caribbean," in Governance in the Age of Globalisation: Caribbean Perspectives ed. by D. Benn and K. Hall (Kingston,2003); "The Invention of Racism and the Dynamics of Race: The Caribbean and Global Africa," in Racism in the Global African Experience ed. by K. Prah (Cape Town, 2006); "Aimé Césaire (1913-2008): Architect of Negritude," Nka: Journal of Contemporary African Art (No. 24, 2009); “Evolving Thoughts on the Afro-optimism/Afro-pessimism Debate” in Perspectives on Thought Leadership for Africa’s Renewal ed. By Kwandiwe Kondlo (Pretoria, 2013).