As the COVID-19 pandemic and social justice protests rocked American society, Washington Post reporter Tracy Jan and her colleagues spent months reporting on systemic racism through the life of George Floyd, a Black man killed in police custody in May 2020.

“We examined the role racism played in housing, education, health and the criminal justice system, denying Floyd economic opportunity at every turn,” said Jan, moderating the webinar “Racism in America: Economy” hosted by the College of Arts and Sciences (A&S) in partnership with the School of Industrial and Labor Relations (ILR) on April 27.

Four Cornell faculty members from A&S and the ILR School discussed the ways racism shapes economic policies, and how economic policies shape inequality in America – historically and today. It was the last in a yearlong series, hosted by A&S and supported by Alumni Affairs and Development, eCornell and Diversity Alumni Programs, that has examined the effects of racism on health, housing and education, policing and protest movements. 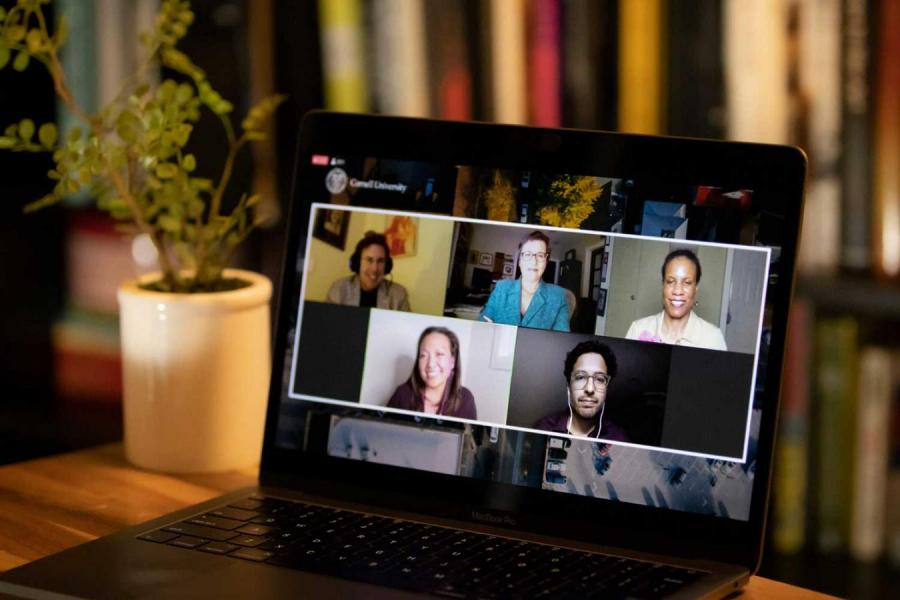 From 1979 to 2019, Black men’s labor force participation lagged below that of white men, said panelist Erica Groshen, senior economics advisor in the ILR Labor Dynamics Institute and research fellow at the Upjohn Institute for Employment Research.

“This large economic difference is associated with the systemic racism you’ve been hearing about in this series: differences in hiring practices, access to education, the criminal justice system, health care, housing, wealth and more,” Groshen said.

Joining Groshen on the panel were Lawrence Glickman, the Stephen and Evalyn Milman Professor of American Studies in the Department of History (A&S); Tejasvi Nagaraja, assistant professor of history in ILR; and Riché Richardson, associate professor of Africana studies (A&S).

Glickman traced rhetoric connecting racism and the economy back to the end of the Civil War and Reconstruction. Opponents of Reconstruction were interested in maintaining racial hierarchy, to the detriment of national prosperity, he said.

Racial capitalism has profited from commodifying and marketing Black bodies, Richardson said. Advertising built on stereotyped characters such as Aunt Jemima, used by Quaker Oats Company (owned by PepsiCo) for decades to sell pancake mix and syrup, draws on myths steeped in antebellum slavery, pathologizes Black poverty through related stereotypes, such as the matriarch, and overshadows the real contributions of Black women leaders, such as Mary McLeod Bethune, she said.

In response to uprisings after George Floyd’s death, parent company PepsiCo changed the name and branding to Pearl Milling Company, but Richardson thinks the changes don’t go deep enough yet: “It’s easy to make surface changes. It may be harder to talk about inclusivity in work cultures.”

To better understand racial barriers to workforce inclusion and promotion, Nagaraja compared postwar America in 1945-1946 with America in 2020-2021, when the country has been dealing with a pandemic, a tumultuous election and nationwide protests against racial injustice.

“Activists and policymakers then and now see these as crisis opportunity moments where racial policy and economic policy are inextricably linked,” Nagaraja said.

After World War II, he said, labor and civil rights movements made certain gains, but new instances of inequality took shape in housing and finance, in the welfare state and the realm of credit, which echo into today’s era of mass incarceration.

Economic inequalities formed in previous eras have been laid bare by COVID-19, Groshen said. During the pandemic, many white-collar workers have been able to work from home and maintain their incomes and job security. But where wages were lowest, in sectors of the economy in which nonwhite workers are disproportionately represented, workers can’t work from home and must choose between endangering their health or their family members’ health, or losing their jobs.

“This was a very different set of choices for people,” Groshen said. “Disparities became much more glaring.”

But the pandemic and the protests of the past year have been a wake-up call, the panelists said.

“It was amazing to witness protests in all 50 states in this nation as well as in cities around the world,” Richardson said. “In the wake of the tragic loss of George Floyd, there was a lot of hope in possibilities for change. We saw that response across many different institutions, including within higher education. It seemed it was a moment that engendered a lot of self-reflection about becoming more diverse, more inclusive.”

Times of change make people question the way things are – in a healthy way, Glickman said.

“Think about essential labor,” he said. “Today, we see that people who kept our country going during the worst of the pandemic were generally poorly paid, often people of color, women. In health care, in retail.”

Mass incarceration is another example, Glickman said. “Not long ago there was a general sense that this is just the way things are. Now a lot of people are asking whether this makes sense. I’m hopeful about the questions we’re asking.”