In 2014-15 Assié-Lumumba organized the most successful annual conference of CIES which was held in Washington, D.C. in March 2015.  She introduced the idea of engaging other world epistemologies with the theme “Ubuntu! Imagining a Humanist Education Globally.” The 2015 CIES Conference set new records with more than 1,900 abstract submissions leading to about 730 plenary and concurrent sessions, and more than 3,300 attendees from more than 100 countries.  Prior to the conference, she invited several academics and practitioners from different institutions in different regions of the world to provide regional and thematic perspectives on the Ubuntu theme. Her presidential address delivered in March 2016 was titled  “The Ubuntu Paradigm and Comparative and International Education: Epistemological Challenges and Opportunities in our Field”.  It will be published in the February 2017 issue of Comparative Education Review. CIES fosters cross-cultural understanding, scholarship, academic achievement, and societal development through the international study of educational ideas, systems and practices. 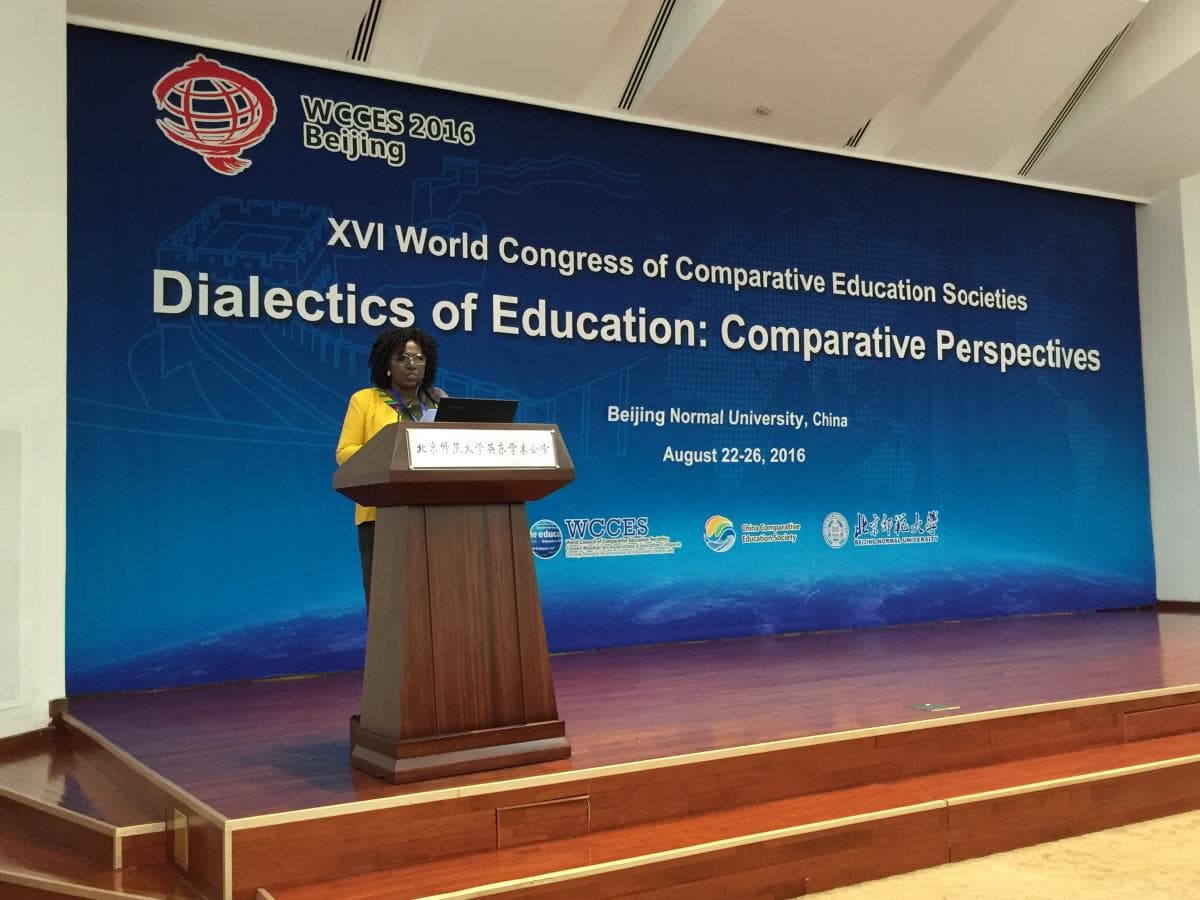 Assié-Lumumba states that her leadership experiences, including for CIES, have prepared her well to effectively engage the members of the societies that constitute WCCES. “I am poised to bring WCCES a vision and a leadership with team spirit, cognizant of the diverse nature of our global community.”

The two specific goals of the WCCES, as stipulated in its statutes are: “to promote the study of comparative and international education throughout the world and enhance the academic status of this field; [and] to bring comparative education to bear on the major educational problems of the day by fostering co-operative action by specialists from different parts of the world.”

Assié-Lumumba expresses her gratitude to the representatives of WCCES for putting their trust in her. In her vision articulated in Beijing as the new president of WCCES she stated: “Education in its international component is one of the driving forces of globalization. WCCES is well positioned to contribute to taking the challenges of a multipolar world and acknowledging the changing world with increased voices for the Global South and hitherto marginalized voices of the Global North…Comparative education provides the intellectual template for promoting paradigms and world epistemologies for learning and the production of knowledge. Deliberate efforts will be made to pursue participation of members taking into account diverse grounds of identity for consistent inclusiveness.”

The XVII Congress of WCCES will be held in 2019 in Cancun, Mexico with the theme, “The Future of Education.”

Assié-Lumumba is a professor of African and diaspora education, comparative and international education, social institutions, African social history and the study of gender in the Africana Studies and Research Center. She came to Cornell in 1991 as a Fulbright Senior Research Fellow and Ford Foundation/Africana Studies Fellow. She is a lifetime Fellow of the World Academy of Art and Science. She is also Distinguished Visiting Professor in the Ali Mazrui Center for Higher Education Studies in the Faculty of Education at the University of Johannesburg, and Extraordinary Professor in the Department of Education Policy Studies at the Stellenbosch University, both in South Africa. She has been a Carnegie Diasporan Fellow at the University of Ghana and received many other awards and distinctions.